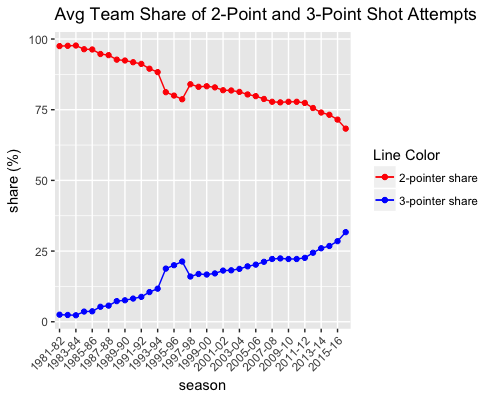 Stephen Curry’s all-time record of 402 3-point shots made in the 2015-16 season was simply amazing. At the time of this writing, Curry holds the record for having made the most number of 3-point shots in a single season. Gold State Warriors, who are known for their swift ability to make 3-point shots, have inspired me to do this analysis. Watching their games, I wanted to see whether teams now are shooting more 3-point shots than those in the past.

The answer became clear when I plotted the share of 2-point and 3-point shot attempts over the years. I could also see that teams have gotten better at making 3-point shots. We see a gradual increase in the 3-point field goal percentage since the 1981-82 season, although it seems the level has plateaued in the recent years. There do appear to be some anomalies in the above two plots:

I do not know what caused these anomalies. They may very well be the result of quirks in the data.

However, the general trend is clear. Teams are shooting more 3-point shots and they have gotten better at making 3-pointers.

Edit: It was pointed out by a Reddit user that the increased share of 3-point shot attempts between 1994-1997 was due to the shortened 3-point line.